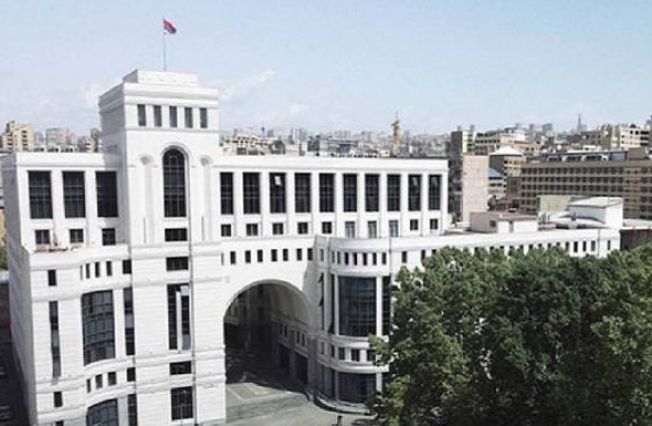 In order to halt the aggression unleashed by Azerbaijan on September 27, 2020, against Artsakh and its people, with the direct involvement of Turkey and foreign terrorist fighters, on November 9, 2020, with the mediation of the President of the Russian Federation a Trilateral Statement on complete ceasefire and termination of all hostilities in the area of Nagorno-Karabakh conflict was signed, which resulted in deployment of peacekeeping forces of Russia in Artsakh.

Today we once again bow before the brave Armenians who sacrificed their lives for the sake of the right of the Armenian people to live and build their own future, preventing the attempt of the aggressors to completely annihilate the Armenians from Artsakh.

The 44-day war, accompanied by mass violations of international humanitarian and human rights law, deliberate targeting of civilian infrastructure and cultural monuments, use of prohibited weapons and other war crimes by Azerbaijan, resulted in thousands of casualties, tens of thousands of wounded, displaced people and mass devastation. As a result of the war, a number of regions of Artsakh were subjected to ethnic cleansing, and the population became victims of war crimes and mass atrocities committed by Azerbaijan. In particular, 40,000 people lost their homes and property, more than 17,000 civilian facilities and infrastructure were destroyed, hundreds of civilians were killed or injured, and the fate of many still remains unknown.

Armenia and Artsakh have consistently implemented the provisions of the Trilateral Statement, while just a month after the signing of the latter, despite the commitment to stop in the current positions at the time of signing, Azerbaijani armed forces infiltrated into Khtsaberd and Hin Tagher villages of Hadrut region of Artsakh, killing and capturing Armenian servicemen. Moreover, after the withdrawal of the Armenian troops from the regions mentioned in the document, the Azerbaijani side responded with the infiltration and continued illegal deployment of its armed units into the sovereign territory of the Republic of Armenia from the very same territories.

Azerbaijan has not yet implemented the paragraph 8 of the November 9 Statement, holding numerous Armenian prisoners of war, hostages and other detained persons in captivity, which is not only a gross violation of the Trilateral Statement but also of international humanitarian law.

The ceasefire regime established by the Trilateral Statement is periodically violated by the Azerbaijani armed forces, accompanied by targeting not only the positions of the Armenian Armed Forces and Artsakh Defense Army, but also peaceful settlements and civilians, leading to human and material losses.

Deliberately distorting and arbitrarily commenting the provisions on unblocking regional infrastructure enshrined in Trilateral Statements from November 9, 2020, and January 11, 2021, Azerbaijan circulates the idea of a so-called "corridor" and threatens with the use of force, which not only contradicts the letter and spirit of those statements, but also aims to undermine efforts of de-escalation in the region.

The consistent Armenophobic policy blatantly conducted by the highest leadership of Azerbaijan, the ethnic cleansing in the territories of Artsakh fallen under the Azerbaijani control as a result of the use of force, the destruction and desecration of the Armenian cultural and religious heritage, as well as the obstruction of the access of international humanitarian organizations to Artsakh demonstrate the fact that the guarantee of the right of the Armenians of Artsakh to safe and dignified life in their homeland under the jurisdiction or control of Azerbaijan is impossible.

Only the full implementation of the Trilateral Statements from November 9, 2020 and January 11, 2021, particularly the immediate resolution of urgent humanitarian issues, first of all, the unconditional repatriation of all prisoners of war, hostages and other detained persons, the clarification of the fate of missing persons and the investigation of the cases of enforced disappearances, protection of the Armenian cultural and religious heritage, as well as the full resumption of the process of peaceful settlement of the Nagorno-Karabakh conflict can create conditions for ensuring lasting peace and stability in the region.

The comprehensive and lasting settlement of the conflict is only possible through peaceful negotiations under the mandate of the OSCE Minsk Group Co-Chairmanship, which assumes the clarification of the status of Artsakh, ensuring conditions for the safe return of displaced Armenians of Artsakh to their places of residence throughout Artsakh, and realization of the right of the Armenians of Artsakh to safe and dignified life in their homeland, based on equal rights and self-determination of peoples.

Armenia reiterates its readiness to undertake practical efforts towards the de-escalation of the situation in the region, gradually overcoming the atmosphere of hostility, opening an era of stability and peaceful development. At the same time, for the effectiveness of this process, Azerbaijan should adopt a constructive position, renouncing its policy of Armenophobia, aggressive rhetoric and actions.